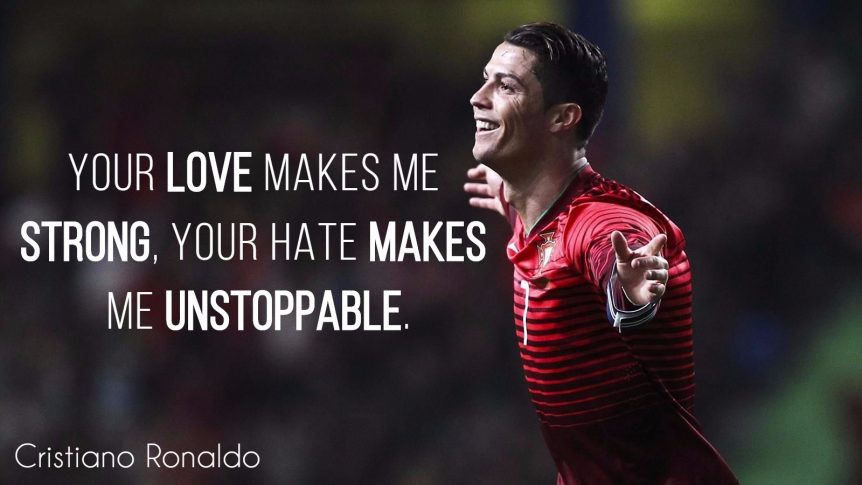 Cristiano Ronaldo dos Santos Aveiro is the name of, probably, the most hated on football player in the world of our time. And has been for over a decade.
There are people that feel they can’t stand him. Even in the country where he scores most of his goals, wins most of his trophies, not only for himself but for his club. For their own club.

Real Madrid. There must be a large number of people in Spain who love him for all of his accomplishments with this club. And of course there are just as much people there who do not like Real Madrid one bit. And probably just hate Ronaldo for being on their side. And for who he is: the magnificent football player who leads his team, any one of ‘em, to victory. Time and time again.

“It’s the way that he looks. The way he acts. The way he speaks. The way he does this. Or doesn’t do that.”
You know what… It’s all bullshit. Whatever ‘it’ is, it doesn’t even matter.

You’re either a fan or a hater, so it seems.
Nothing much in between.

Personally I’m a lover of the game. All the excitement that comes with it. The beautiful actions, goals, stops, interactions between players, the comradeship, the respect for one another, the hard work and the seeming ease with which it is all done. I just love it. I mean, what’s not to love about it?!

Most, if not all of these things can be found back in Cristiano Ronaldo’s game. Just as it can be found in let’s say Lionel Messi’s. But why compare the two all the time. I just enjoy the fact that there are wonderful, extraordinary players like these.

Whoever wins in whatever game, we all come out victors. 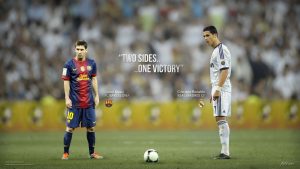 The constant on-going comparison only comes from haters. Who have a passionate love and idolization for one of the two. That justifies in their mind their hatred, despising and contempt for the other one.
It makes people feel good (about themselves) when their idol does well and his made out ‘adversary’ is not. Because it makes them ‘right’, in their minds.

When it comes to the comparison of Ronaldo vs Messi (or vice versa), at one point we’re all gonna have to let go of the whole thing. People who are holding on to it don’t realize whatever they’re doing is not working. And besides that: it is sooo outdated.

“But why is hating Ronaldo (or Messi) not working?”

Let’s just look at yesterday’s “Ronaldo vs Spain”… World Cup 2018’s first big match.
Of course it was a team effort on both sides. So it was Portugal, not just Ronaldo. But when it comes to Spanish ‘fans’, and the hone they expressed whenever Portugal’s number 7 had the ball in possession, it was clear that the game was viewed as “Ronaldo against us”. The constant whistling of ‘fans’ in the stadium, trying their ‘best’ to get him out of balance.

What they should have known, after all these years that the very same legendary player gave ‘their’ Real Madrid so much of his energy and has benefitted so much from his effectiveness as a goal scorer under pressure, is that Ronaldo only plays better and better when being hated upon.
It’s like it gives him the energy and extra drive to prove that he’s ‘the best’ once more… and more… and just continues to do so. Not until he has silenced ‘em all. Because he knows they’ll just go on. And so, so does he. The guy is just unstoppable.

This is why hating him doesn’t work. It is counter productive actually. 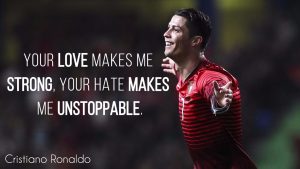 To enjoy the continuous flow of his extraordinary accomplishments – like yesterday leading his country to two leads against ‘mighty Spain’ and eventually completing his hattrick with a phenomenal free kick, unstoppable for any goalie (I won’t add fuel to this particular goalkeeper’s flame of pain intentionally) – you can either love and support him or hate and criticize him all you want. Eitherway, Ronaldo’s skills, mindset and drive will not be affected. If anything we all should have learned thát by now.

you can either love and support, or hate and criticize him
it just doesn’t matter

He’s only getting more pumped to do his thing. And whether you like him or not, we all can agree: the things he does, only he can do so well.

Now I won’t get into the “who is best” discussion. After reading the above well, without bias and prejudice, you already know: to me it’s not about one being ‘above’ the other.

I’m about Love and Respect. And I love it that all of us get to enjoy all of the triumphs and successes that we create together! Lionel Messi, Cristiano Ronaldo, etc. etc. these are just names. There are twentytwo players on the field at every match. There are thousands of people cheering, making noise and sometimes being silent, in every stadium. There are millions worldwide, at home or somewhere else, watching the games just for fun, or with a lotta passion. Together a great energy is created around what happens on the field, in our minds and our hearts. 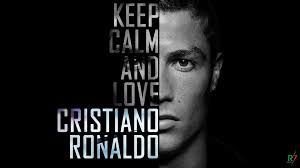 You can say it’s just a sport. A highly competitive one, nonetheless. And of course that’s true as well. But the magic that comes with it… the sense of unification, the love for ‘your side’… the love for the game as a whole, and the excitement it brings… is far more greater than anything that can be said or written about one particular player.

The love for the game… is far more greater

So my advice to each and everyone is: enjoy your life, spread positive vibes and feel good about all of the wonderful things we get to enjoy, courtesy of the ones being loved and hated.

And while contemplating, just ask yourself:

What’s not to love when millions of hearts are being filled with joy and pleasure?!

Força Cristiano Ronaldo!!! I wish you well, like I wish any and everyone well… <3

Due to his background, Edwin Linders (author of this story and Indische Indo* poet and writer) relates and empathizes to the fullest with the outkasts of the world.
The underdogs… He feels with his heart and writes from the soul. For the betterment of ALL <3

*Edwin Linders is, what’s being called, an ‘Indo’
(of mixed blood: part Indonesian and non Indonesian. in his case: Indo-European).
But he’s not just any Indo… he’s an Indische Indo.
Indische Indo’s are a people that live on in diaspora throughout the world, where they have enriched many societies with their culture, after their home country, the Dutch East Indies, ceased to exist.

His closing statement: “I think it’s always so easy and lame to cheer for ’the popular team’ and the obvious idols. Personally I just don’t relate to that. I feel connected with the underdogs of the world. The outkasts. I think it’s in my [Indische Indo] blood, to rather see someone rise up out of the ashes like a sphinx. Against all odds. In that I see myself, ourselves, back.” 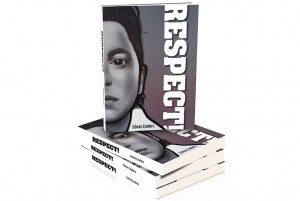